I only need enough stuff for the Munich concert, so I can unpack much of the van and store it in the cellar, but I need to add some of the musical equipment, so the van isn’t exactly empty when I head off to Munich and I’ve shifted a lot of gear to and from the cellar. But it’s a lovely day for a drive and perfectly suited to Sarah McClaughlin’s ‘Rarities and B-Sides, Vol 2’ which I’d downloaded from Zunior.com last year It’s got a couple of duff tracks, but overall it’s a nice mix of unusual songs and collaborations. Being an odds and sods sort of album, one has to live with jumping from ‘Prayer of St Francis’ to a DJ Tiesto remix of ‘Silence’ (which is great driving music by the way). but overall, a good album. Stayed at the HOtello in Hohenzollentrasse, very nice with private parking.

May 2nd, Tonights concert is in the Herkulessaal, in the Residenz complex. It’s a magnificent hall, with a wonderful sound of it’s own, a very even, clean reverberation that isn’t too long and hardly any slap back. The organizer tells me it is famous for having one of the best acoustics in Europe. The big drawback is that it doesn’t have any installed sound system (mainly being used for non-amplified events) so we have to bring one in from the outside. And it’s not allowed to fly a system, so we have a stack on each end of the hall. A bunch of delayed satellites (Ugh!). 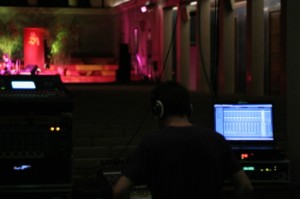 Manartha (who handles the sales) showed up last night and is ready for his first concert. The contract with the organiser states that there should be two helpers to help get the van unloaded (M having a bad back/front can’t lift). And there they are, Ronia and Denis, ready to go. So I give them some odds and ends while I get the heavy stuff out of the van and ten minutes later there back for more. Or would be, if they didn’t have to leave immediately for some reason that wasn’t too clear to me. In a sense, the letter of the contract was fulfilled. They were there when we arrived. They just didn’t stick around… A similar thing happened at the end of the concert, they helped with a couple of light loads, then gave me a big smile, said thanks and disappeared.

The concert itself, their first for many months, goes well. The hall is sold out and the audience enthusiastic. There are some beautiful new songs and the organiser is exhausted and very happy.