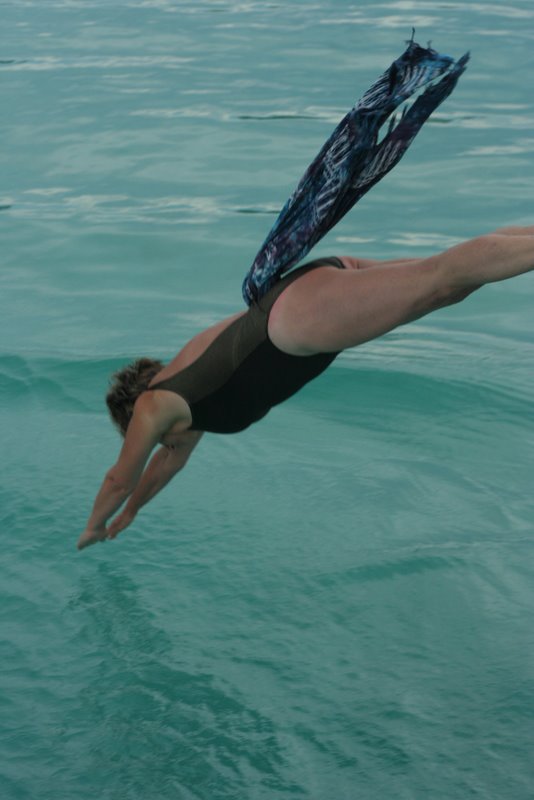 A mixed and varied week of breathless days and storms, hot sun and torrential rain. A fresh influx of Germans replace the outgoing group (except for the dozen that have stayed over for a second week) and a full and juicy group it is. I try my hand at freediving and we all play with the dolphins and go snorkelling at Turtle Rocks.

1 Sep – Yesterday was Monday and was my day off the boat. The sea was mirror flat, hardly a breath of air, conditions which makes it easy to spot a pod of dolphins from a long way off, and the group wasn’t disappointed. They spent a couple of hours swimming with the dolphins and came back blissed out. The crew said it was one of the best days ever… me, I’d spent it sitting at a hot laptop programming… so it goes. 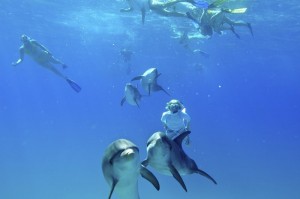 So I was especially happy that today we had similar weather (with some breeze, which was even better) and within an hour had come across a small pod of bottlenose dolphins. Compared to Spotted dolphins, Bottlenose tend to stay down longer and hunt for fish in the sandy bottom and have little interest in people so it was a pleasant surprise to find that these bottlenose, although still into feeding, were curious enough to hang about a bit on their way to the surface. It’s the first time I’ve swum close to bottlenose, and I was surprised how much larger than the spotted dolphins they are. They also stay down much longer than spotted dolphins. But I discovered that if I waited a few minutes while they hunted out a few fish and were nearly ready to come up, then headed on down, they’d come meet me on the way up and we would circle each other a bit and show off and then come up for air. We swam together for about an hour or more and then they moved on. 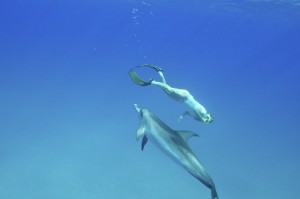 We moved on further north and stopped by the edge of the ‘trench’, the deep water between Florida and Bimini where the Gulf Stream flows north to Europe. The water is very deep and we dropped down a rope with a weight so that we could practice our free-diving skills. It’s the first time I’ve tried this and went on down to 60 feet (19m) which is my personal best. At that depth I’m pretty much weightless and neutral bouyant and it’s pretty spacy hanging there with the surface way up above and nothing below you. 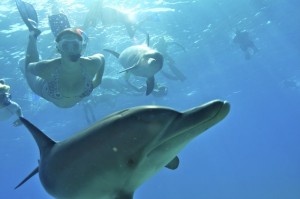 Next on to the same area where the dolphins were found the day before and we came across the large pod (50 or 60 individuals?) moving slowly SW. We popped in the water and half a dozen stayed to play with us and we were there for a couple of hours. Being spotted dolphins they didn’t spend so much time on the seabed and were more interested in staying on the surface and swimming in amongst us, which is great for those of the group that can’t, or don’t like, to dive down. Everyone could just float. I had a lot of beautiful encounters, especially with one dolphin who I got to examine in great detail. He (or she) seemed content to swim so close to me that I could have nudged him with my nose just by nodding my head. It was a great opportunity just to drift together, and sometimes play the game of “who can swim the tightest circle” (he won of course) which I’ve played with the spotties before. His skin had a lot of scars, presumably from sharks attacks. In fact, once you get real close to the dolphins you can see that they get some rough times. Many of them have chunks missing from their fins, one of these had a massive scar on his side that looked like a shark had taken out a chunk of flesh. Tough life down there. It’s often said that dolphins know two predators: sharks and people. So I’m always amazed that they enjoy swimming with us despite the fact that we decimate their population. 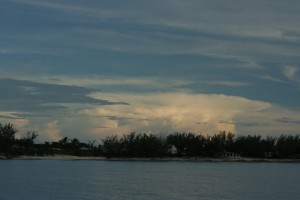 4 Sept. – today starts with torrential rain and wind, which disappears as quickly as it comes and by 11am it’s looking stormy but with little wind and reasonably flat ocean. Time to head out. But to the north (where we planned on going) the clouds are thickening up and spitting thunder and lightning so we head south to Turtle Rocks, a reef diving site to the south of Bimini. The sea is quite rough but we anchor up and spend an hour or so exploring the area. Its on the edge of the trench and there is the possibility of spotting some sharks and other deep sea fish, but all we saw was a small reef shark and a Southern Ray. I’m still producing yellow gunk from my sinuses, but less of it than before and generally feeling a bit clearer between the eyes. 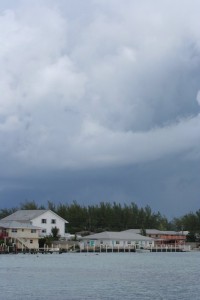 Refreshed and cooled off, we decide to head north in search of some dolphs to play with but by the time we reach North Rock it is getting darker out to the east and we make a quick circle round and head back to the dock. On the way back, passing through some heavy rain and strong wind, so we’re all up on the front trampoline dancing to Michael Jackson and whooping away. 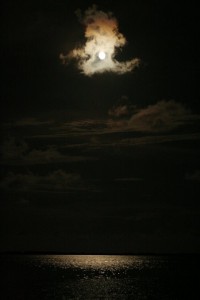 September 7th is Labor Day in the US and over here in the Bahamas they also celebrate it as the end of the summer, though the celebrations start on the Friday evening and extend on through till the Monday. Despite the feeling that I should be out in a beautiful warm full moon night sampling the local night life, I end up having an early night as usual…