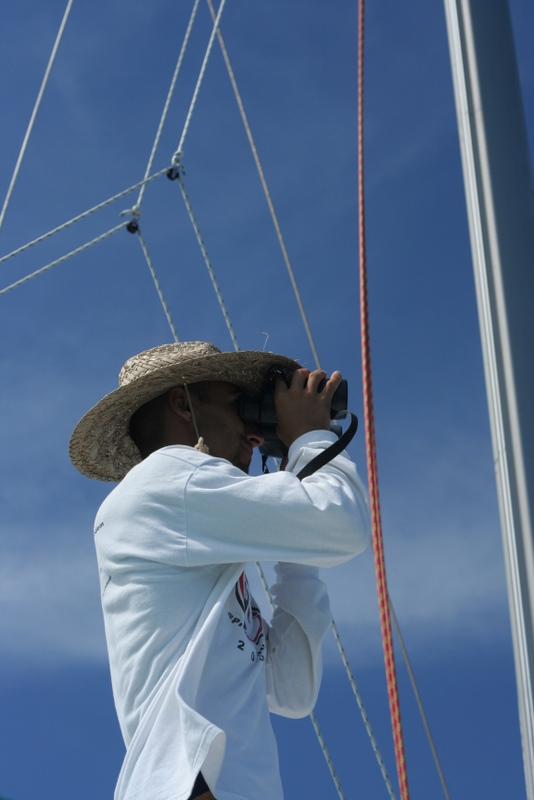 We’ve tried, without success, to contract the dolphins to show up regularly at a set time and place, we’ve offered them unlimited fish and squid, but they obviously value their freedom higher than that. And so we have to head out to the ocean every day in search of one of the pods, armed only with binoculars and a lot of patience. We, as humans, tend to sail above the surface of the sea. Dolphins are more at home beneath the surface. This obviously introduces some difficulties to the process of finding a small group of dolphins in a very large ocean. 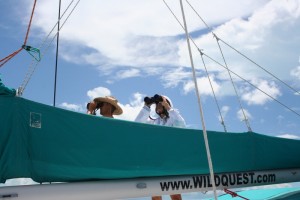 22 Sept – Spotting the dolphins involves having one or two crew members standing on the cabin roof armed with binoculars scanning the waves for signs of a dark grey fin, a tail splash or possibly a breach (jump). On a day when the ocean is totally flat one can spot a fin hundreds of meters away, but with any kind of wave motion, trying to spot a small grey fin is difficult. Add to this that a bottlenose dolphin dives for an average of four minutes before surfacing for a breath and going back down, it means that you have to be looking in the right place at just the right time to spot anything. We are helped by the fact that they tend to surface for two or three breaths before going down, and that if there is a small group they will surface at different times (although they often seem to practice synchronised swimming), but it is still a tricky job standing on a boat bouncing over the waves with a pair of binoculars scanning a choppy sea for a sight of dolphin. Spotted dolphins are a little easier as they seem to spend more time on the surface. 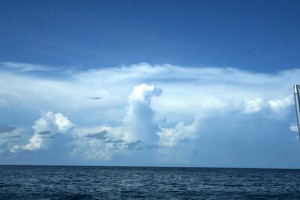 So today has been choppy with a good swell as we head further north making balancing pretty tiring and the sea surface is a mess, but apart from that it’s a beautiful day with a nice cool breeze. And Atmo and I are on the cabin top with the binoculars spotting and suddenly Atmo says “there they are, on the bow” and there were a couple of dolphins just off the bow, they took a breath, went back down and, search as we might, not seen again. And that kind of sums up how difficult it is spotting dolphins on this kind of day… 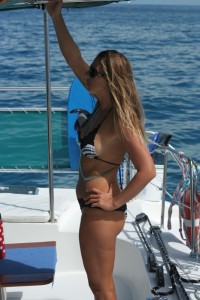 25 Sept – we met up with a dolphin kindergarten today, about a dozen youngsters with a couple of older females watching over them. Like human youngsters, the dolphin young are noisy and squealing and tumbling around each other with loads of energy. They don’t appear too interested in us and, apart from a few curious forays into our midst, are totally involved in their own games. The mothers swim amongst us briefly but are mainly focussed on keeping an eye on their charges. They slowly move off with the current and we return to ship. 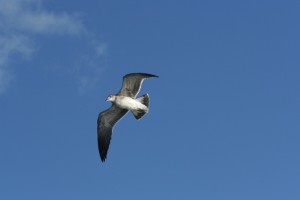 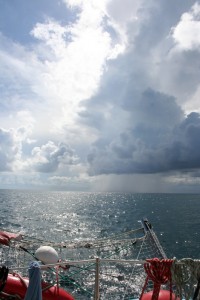 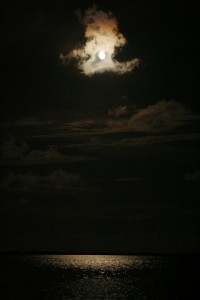