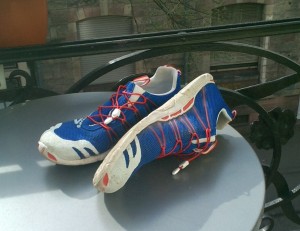 Last Sunday was the 10th Freiburg marathon and the fifth one that I’ve run in. The weather was not too bad, given that we’ve had a run of freezing nights and very cold days, that was a nice surprise. Not sunny, but nearly into double digits. The Freiburg marathon boasts “42km, 42 bands”, and as the course is 21km that translates to a band every 500m. Well, they don’t all show up and when the weather is really bad (cold and raining) few of them do, but last Sunday there was, I guess, about 30 bands, some of them very good and all of them very enthusiastic.

I love the feelings around running, and marathons in particular. There are people of all shapes and sizes, all ages and conditions and at the start and the finish the families are there, it’s a real festival atmosphere. The start and finish of the Freiburg marathon is at the Messe, a large exhibition space on the edge of town which is setup with lots of changing space, places for bags and a hall for exhibitors to show the latest and greatest running gear. And, this being Germany, lots of stands selling Beer and Wurst! The course is entirely through the city, past the cathedral, so it’s cheering crowds all the way and cries of ‘Hop Hop!’ to encourage.

A month or so ago I bought a new pair of running shoes and they have been amazing. They are the Bare X-lite 150 from Inov-8, the ‘150’ being the weight of the shoe in grams and making it the lightest running shoe I’ve had (lighter than the Vibram Five fingers). It fits beautifully and the mesh on top gives it a flexibility that makes for a cool but snug feeling overall. The 3mm thick sole is flat without a heel and this makes it a ‘barefoot’ running shoe. I’ll be interested to see how many miles the sole gives, but so far, after 100 miles, it’s holding up well. 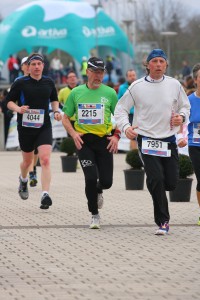 It’s the first run of this distance that I’ve done with barefoot style running shoes. I’ve been running with them for a month, and i’ve had a pair of Vibram Five Fingers for nearly a year, so my feet are used to it. Still, it took a bit of faith to do the run in them. And, I’m happy to say, I did it in less than two hours (1:58) which had been my target time.