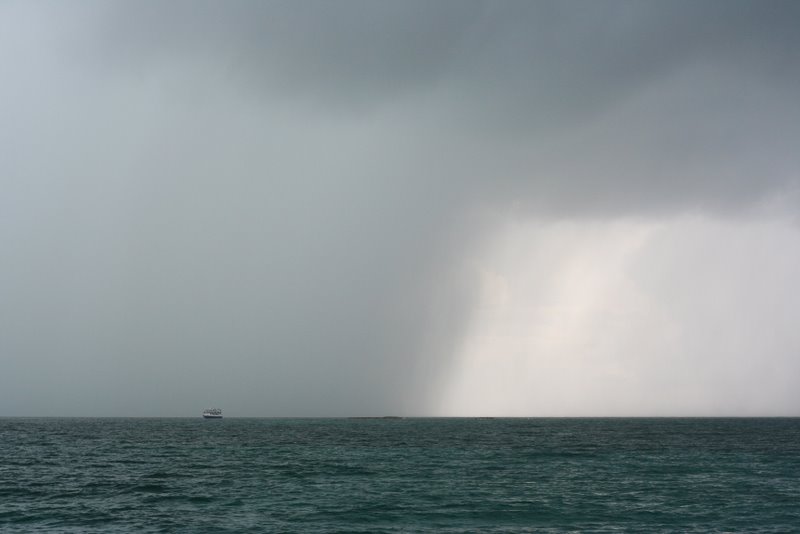 The week started off with a couple of tropical storms passing by. Tropical Storm Ana, the first of the season, didn’t quite make it as far as the Bahamas but disintegrated somewhere off the coast of Cuba. The local Bimini weather wasn’t unaffected though and we had the first couple of days with a fair bit of wind and rough seas outside of the shelter of the island. Later in the week we were expecting Hurricane Bill to appear, but he veered north and we got the tail end of him over the next weekend. This week (and the next three weeks) are facilitated weeks being led by a young German couple, Veit and Andrea Lindau, who are from a group called Life Trust.

Some of the participants will be here for two weeks, a few for three weeks, with new ones arriving every Monday. It means we’ll have quite a few people staying over each weekend, which is our ‘time alone’, but in the end it is quite nice to have them there. They respect our space and yet give the place an extended family feel. 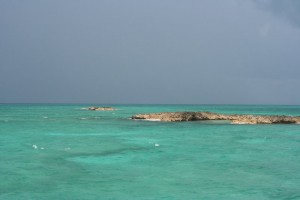 Despite the stormy weather, we still took the boat out, although later than normal, and just went snorkelling on reefs that were in a sheltered area. Wednesday the weather started clearing and we were out for the regular excursion, but no dolphins around. It’s a bit of a stress not sighting dolphins for three days in a row when there are 21 people who are expecting to see some, at least surfing through on the bow wave. 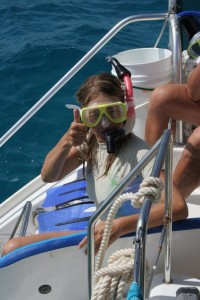 So it’s with jubilant relief when we meet up with a pod on Thursday, and quite a large pod of spotted dolphins at that. The weather had by now cleared to a light wind and lots of sunshine and a reasonably flat sea and after a reef dive and lunch, we’d headed north past North Rock to see if there were any dolphins interested in meeting up and playing. And there were! 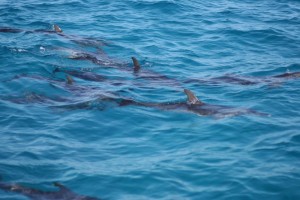 They were on the move, although they would stop and play for a while, then move on, so we’d clamber back on board and move on as well. It’s a great feeling to finally swim with the dolphins after three days of not sighting one. 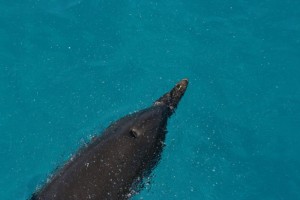 So it felt like a bonus when, the next day, we headed out to the same area at the same time and met the same pod. This time they were just hanging out and we got in the water with them and hung out as well for a session that lasted nearly two hours and would have gone on but we needed to get back for dinner. 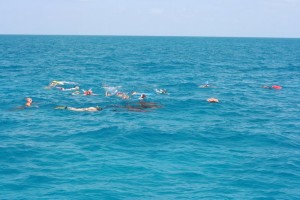 It was a magical afternoon. Although the pod was maybe two dozen, only about half a dozen stayed to swim with us, but they were so mellow and initmate, swimming right in amongst us, and staying close to the surface, so that many just floated with them while a few dived to dance beneath the surface. Sometimes it’s such a frenzy amongst the human swimmers, chasing dolphins, trying to get close to them, that the silent beauty and grace that they exhibit is missed. And sometimes the frenzy is amongst the dolphins, especially if there are a few younger, more excitable members there. This afternoon though the people were so relaxed and the dolphins too, that we could have floated and swum for hours. But by about 6:30 it was clear that we would have to head on back, so with thanks and gratitude and a promise that we’d be back next week, we got everyone back on board and sailed back to the island. Everyone was very happy. It had been a perfect afternoon and even the poor swimmers in our group had had a chance to hangout with the dolphins for quite a time. 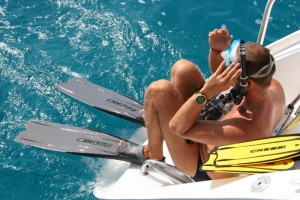 22 Aug – So, last night Miguel and Lucia are sleeping on the boat to be awakened at about midnight by the sound of someone climbing on to the boat. They thought it was another of the team until they glimpsed a black face with a handkerchief wrapped around the lower part and realized that something bad was happening. Miguel radioed up to the house and Atmo and Vijan came down to find Sunshine, our little run-about tender, floating off with someone on board. It turned out that two guys (one ran off, the other disappeared swimming) were trying to float the tender out to the channel. It’s all very dramatic and I manage to sleep through the whole thing. Noone knows who the perpetrators are, but over the next couple of days we find out that it is not uncommon and is usually the work of people smugglers (in earlier times it would have been drug runners) who use the boats to run to Florida and then leave them there. 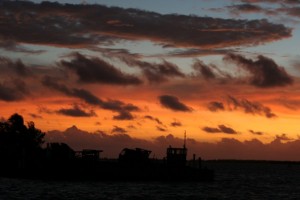